Do you dare to ask your HR manager to practise Kanban?

In 2008, in order to overcome specific offshore challenges, and to improve its quality and productivity, Exilesoft undertook an Agile transformation programme within its project office and delivery teams. While this was highly successful, the rapid change from traditional project culture to Agile culture, as well as the speedy growth of the project organisation, supporting functions, such as HR and operations, were unable to meet the demands of the delivery teams.

In response, HR department processes became stricter, in order to cope with the situation and continue to deliver results. Yet these attempts often resulted in delays, and a lack of quality in every aspect of their work, from deliverables to services. Given the success of the Agile transformation programme within the delivery teams, senior members of the company believed that using the same Agile concepts within the HR department, would also deliver positive results.

After a few rounds of discussions, and careful analysis by engineering staff, project and HR management, greater clarity was obtained about key impediments. These included:

Most of the root causes of these problems related to the history that traditional offshore development processes, involving the remote Customer and the development teams, had faced before adapting to Agile practices.

To improve productivity, and resolve many of the problems above, the HR department agreed to try out a selected Agile method for their day-to-day operations. The initial idea was to implement Scrum processes, however, this was quickly discarded, as there were many foreseen difficulties.

Primarily, the nature of HR deliverables meant a greater amount of ad hoc requests outside the Iteration cycle, many of which required immediate delivery outside the scheduled release (Iteration) cycle. It was decided that Kanban would be a better fit for the HR department over the Scrum processes practised by Exilesoft’s delivery teams. Kanban supported daily planning, continuous delivery, visible progress (through the Kanban Board), optional estimation, and cycle time monitoring (e.g. monitoring the time taken for a new employee to sign in with Exilesoft, from the time the request for the vacancy was raised).

In addition, the concept of limiting Work In Process (WIP) prevented the HR department from committing to work on various tasks that would exceed their capacity. Instead, selecting the right priority, focusing on them, and delivering them faster, could deliver better results. Lastly, by removing the separation between the HR department and the delivery teams, the expectation was to reduce any dependencies that may create latency. Further, this would avoid the ‘over the wall’ approach, and was expected to create better understanding, respect, and communication between people working in both the entities.

The HR team was given sufficient training to convert from traditional management thinking to Agile leadership and team play thinking. To manage the incoming requirements for the HR department, it was agreed to use the same backlog format as the delivery teams.

To visualise progress, the HR manager’s office wall was originally used as the task board. The stories were pasted in the stack column, and the highest priority stories were broken into tasks, and pasted in the ‘To do’ column. Identically coloured sticky notes were used to identify the tasks falling under one User Story. 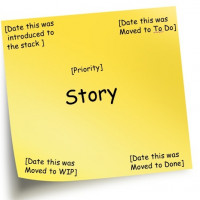 Finally, the HR team conducted daily meetings in front of the Kanban Board at 9.30 am Sri Lankan time; limited to 20 minutes. When there were other teams involved for specific tasks, those teams also participated in the same meeting, in order to update the HR team about their progress and dependencies.

The key challenges were as follows:

The above implementation delivered visible, and positive, results after six months. The HR department, and the delivery teams, started to work more closely, with a better understanding of each other’s capacity, priorities, and the expected level of quality. This created a more solution-focused culture at Exilesoft, instead of different entities trying to pass the work, and blame each other. Some of the key visibilities:

Today, Exilesoft has overcome most of the key challenges of such Agile transition, by standardising the same concepts across other entities, such as the HR department. This transformation has resulted in productivity improvements, and better, self-motivated teams across the organisation.

Thushara Wijewardena is a software professional who has gained over 12 years’ experience in managing software project portfolios in various organisational settings. During the last five years, she has put lots of focus on using Agile concepts in offshore-onshore project engagements, as well as implementing Agile at the enterprise level. Thushara is a speaker at leading international conferences, and an author of many articles related to the subject. Currently she works as the Chief Project Officer of Exilesoft.